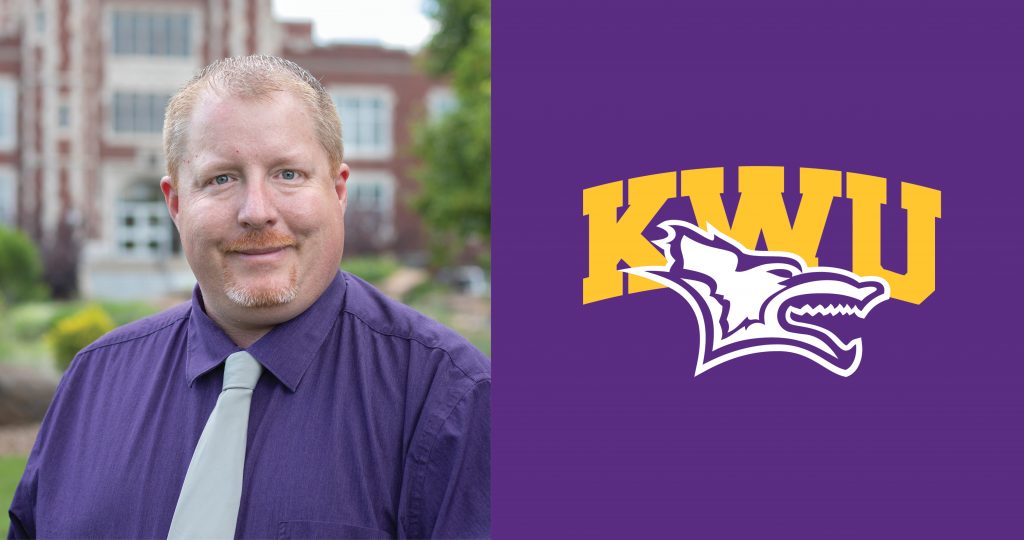 Editor’s Note: The profile below concludes a series on 2022 inductees to the Kansas Wesleyan University Athletic Hall of Fame. The ceremony is set for the Saturday of Homecoming and Family Weekend 2022, Oct. 22 at 8:30 a.m. Tickets can be purchased at https://kwu.vbotickets.com/eventdate/KWU_Hall_of_Fame_Induction_Ceremony/295132.

Like many first-year college students, David Toelle didn’t know where his career path might go when he arrived at KWU in the fall of 1996 for his freshman year.

He knew was he going to run cross country and track for coach John Pickens, but the academic slate was blank.

“I thought maybe history, but no, not so much,” Toelle said. “I came in as an athletic training major but quickly learned that was not the career path for me.”

He soon found his calling sitting in front of a computer screen.

“As the freshman year went on, I discovered that computers and, probably, computer science stuff was the way for me here,” he said. “I felt I had the skills to do something like this and when the opportunity came I just kind of ran with it.”

Twenty-one years later he’s still running with it as KWU’s sports information director. The position itself has evolved in lockstep with Toelle, who has established himself as one of the top SIDs in the NAIA and small college athletics.

“I think he’s a pioneer for the NAIA,” said Steve Wilson, KWU’s former director of athletics. “You’ll see people from across the membership map who see him as someone who does it well and they want to replicate what he’s doing. I’m one of them. When I was in that world, I was coming to Dave for advice.”

The list of Toelle’s accomplishments is lengthy and impressive.

Toelle’s years of dedication and service will be recognized when he’s inducted into the Coyote Athletic Hall of Fame at 8:30 a.m. Oct. 22 in Muir Gymnasium as part of Homecoming 2022.

“I tried to put this off as long as I could, but someone thought it was a good idea to do it. It’s humbling,” he said.

His journey began innocently enough after injuries throttled his running career and Pickens asked him to shoot photos of the team. At the same time, he became close to then-Athletic Director Jerry Jones, essentially working as an office assistant.

“At some point, they needed someone to do stats at basketball games when the person doing it couldn’t,” Toelle said. “It really started with the NSCA (National Small College Association) tournaments that we hosted. I think the first one I did was the ’97 tournament, and it just kind of progressed from there.”

Toelle also worked part-time in KWU’s information technology office, but as his duties increased he moved to athletics full time in 2005.

“There was no handbook to it when I started,” he said. “I took it to the next level and added taking care of every sport and trying to learn every sport and doing the things that no one else was doing at our level.”

He soon was also providing statistics for state high school and national junior college events in Salina, in addition to keeping track of all things KWU. He also works for the city of Salina during the summer, coordinating baseball games at Dean Evans Stadium.

“One of the most important things is he truly loves Kansas Wesleyan, and he gives his heart and soul to it all the time,” former KWU Director of Athletics Matt Williams said. “He was very creative, worked a tremendous number of hours and was constantly thinking. He does a lot for the city of Salina. He’s a sports junkie and he’s done a great job.”

“Best hire I ever had,” Jones said. “Dave is very loyal and cares deeply about Kansas Wesleyan. His ambition when he came here wasn’t to be the sports information director; computers are what he really liked. He puts in so much time and taught himself how to do it.”

Toelle has seen his job evolve in ways few would have thought imaginable.

“When I first started it was faxing, faxing, faxing,” he said. “Even emailing stuff wasn’t really a thing, and now we’re to the point where almost everything’s automated.

“Before ’98-99 I’d haul a little modem from school to school and hook up to a phone line. We had an agreement with an internet provider and dial up and log in and were doing live stats for football and basketball. That was unheard of at our level. It’s been a revolutionary thing.”

Toelle’s latest passion is the streaming of athletic and other campus events. He has been on the cutting edge of the technology and transformation, as fans have been able to witness while watching the Coyotes compete.

“I think, at least in our conference and in our area, we were on the forefront of streaming,” he said. “We’ve been fortunate enough to be able to get the tools to do what we do, and what we do is second to none at our level.”

He’s also seen the growth of athletic programs at KWU with the addition of new sports. Toelle has learned to go with the flow.

“It just adds more challenges to it,” he said. “I actually enjoyed learning new things like flag football, a completely new sport. I knew nothing about wrestling when we had it, and I had to learn everything about it. Still wouldn’t call myself an expert but at least I knew what was going on.”

“(Technology) is just going to continue to grow. There are tools out there now that in five years this profession can be completely different from where it is now,” he said.

“He’s someone who has worked on himself professionally through the years, he always wants to become better at what he does,” Wilson said. “To see someone after two decades with that kind of drive still is pretty impressive.”

For Toelle, it’s just part of the job and serving his alma mater.

“I hold this place near and dear to my heart,” he said. “I owe a lot to Kansas Wesleyan.”

“I don’t know that anybody bleeds purple and gold more than David Toelle,” Wilson said.